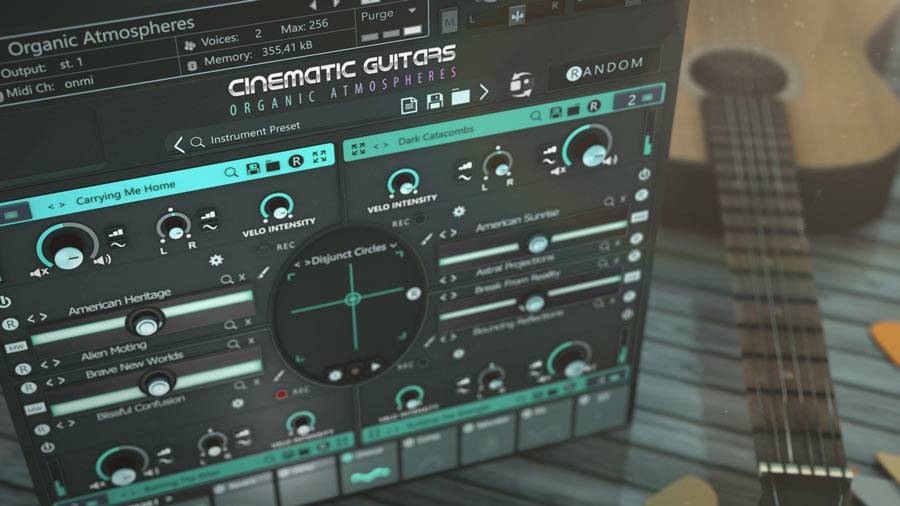 Derived entirely from recordings of real acoustic guitars of all shapes, sizes, and styles, CINEMATIC GUITARS ORGANIC ATMOSPHERES allows for an astronomical array of diverse, organic sounds in inventive ways that emphasise both the natural and earthy tones of realism and the imaginative world of cinema. All are a perfect fit for its inspired nomenclature. Needless to say, an inspiring individual was tasked with creating all the original samples from a suitably sizeable guitar collection — composer, performer, and producer extraordinaire Steve Quimette, namely… famed for his Guitar Hero exploits.

Exploiting his extensive knowledge and adventurous performance styles, Steve Quimette rose to the occasion, creatively criss-crossing countries and continents with a diversity of unprocessed recordings ranging from Southern, Southwest Bluegrass, and Old Western to Pacific Islands and traditional Asian genres using unique instruments such as the 4-string Cigar Box guitar, Baritone guitars, bowed and traditional Ukuleles, Puerto Rican Cuatro, Marx-O-Chime, Dobro, Purgatory Hill Harp, Silvertone Archtop, and much more besides. Beyond that, this truly magical material was duly developed by the Sample Logic team to create a wide range of all things organic- and acoustic-sounding, bringing breathtaking soundscapes to the discerning DAW (Digital Audio Workstation) user — Standalone mode operation notwithstanding, of course! From blissful and lush, dark and mysterious, bombastic and edgy to bowed, plucked, and strummed, those 850-plus presets — produced from 5GB sample content — collectively cover much musical ground, ranging from simple and stationary textures through to complex tempo-synched sonic animations. All are but a click away, while those seeking an adventurous atmospheric experience like no other with a more personalised touch can craft their own original soundscapes in a mere matter of seconds!