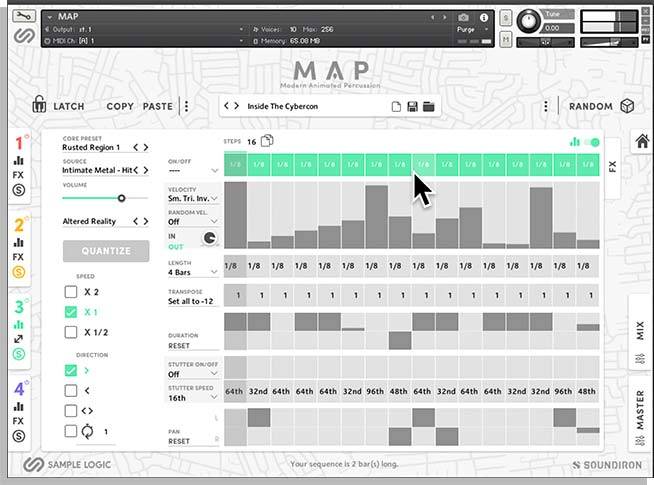 Sample Logic & Soundiron have teamed up and are proud to introduce the world’s most modern drum machine: Modern Animated Percussion. MAP redefines everything you know about percussion and rhythms. Built for the full Kontakt sample player, MAP contains over 6,000 sounds and instrument presets. The intuitive design and programming of every preset delivers infinite options for sound sculpting. Packed with creative presets, the effortless user interface makes it easy to conjure rhythmic timbres and tones.

BLURRING THE LINE BETWEEN PERCUSSION & RHYTHM
MAP gives you the production quality of a polished audio loop alongside the dynamic flexibility of a drum machine. Change any aspect of the sound with infinite sonic results. How is this possible? The secret is in the infrastructure; even though each preset might sound like a perfectly produced rhythmic audio loop, it is much more, as there are no loops in this product. In the driver’s seat is a supercharged MIDI based drum machine, triggering samples with the elasticity of an arpeggiator.