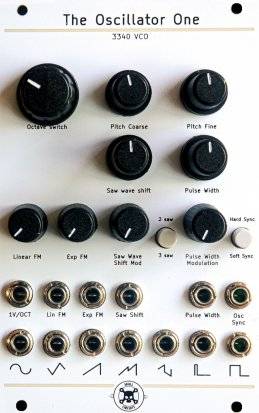 Since Coolaudio started reissuing old IC’s used in various synths I always eyed the V3340, which is a reissue of the CEM3340 chip as used in many classic synths such as the Roland SH101, Prophet 5, Memory Moog and plenty of others. It’s, in essence, a fully featured 1V/oct oscillator on a single IC and thus takes away a lot of the headaches inherent to VCO design. Things like linearity and temperature compensating are taken care of for you. This takes away a lot of the pain of building VCO’s, in fact, since these IC’s are available again a DIY polysynth starts to become a possibility.

So, I ordered one – just one, they’re quite expensive – and started testing. It really doesn’t take that much effort to get the oscillator running and I based the circuit on the CEM3340 datasheet, various implementation examples on the electric druid website, the nonlinearcircuits VCO-1 and various other sources. It’s no surprise, but there are very little modern resources available for this IC.

Since I was implementing an oscillator anyways it looked like a perfect opportunity to add some interesting wave-shapers to the circuit. First and foremost a triangle to sine wave shaper, because I really wanted a sine output and the CEM doesn’t offer one. I tried a few ways and settled on a design I found on Thoma’s Henry’s excellent site which seemed to produce a suitable sine. It’s certainly not perfect, but it does the job.

In addition to the sin wave shaper I’ve also added a linear ramp waveform. It’s sort of a mix between a square wave and a saw wave and offers a different kind of feel to it then either of them. I got the idea from the Intellijel Rubicon oscillator which features this waveform and it’s not that hard to think up a suitable circuit to produce that waveform from the combination of a saw and a square wave.

While looking into various wave-shaper designs I found a schematic to phase shift a saw wave. That gave me the idea of trying to implement a ‘super-saw’ by shifting several saw waves and mix them back together. Turns out it’s not really a ‘super-saw’ in the Roland JP way, but it does sound nice. I didn’t went all the way with this idea as I quickly ran into some problems when you have several waveforms added on top of one another. Shifting a single saw wave around mixed together with the original one already sounded very nice. I fixed the 2nd shifted saw at 90° and it can be toggled on or off for a different tone.

Overall I’m very pleased with the sound quality of the oscillator. It produces really nice and rich sounding waveforms.