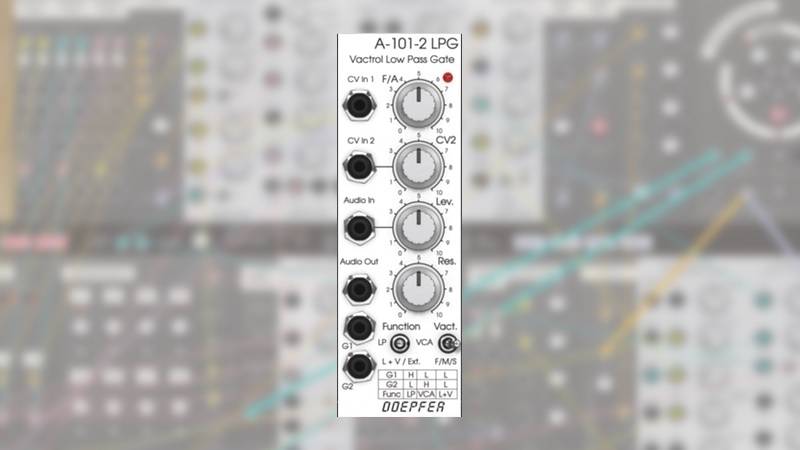 Softube is proud to launch Doepfer A-101-2 Vactrol LPG — a plug-in version of Doepfer’s modernized take on the Buchla LPG (Low Pass Gate) concept, complete with clever and creative additions — as a new module for its perennially popular Modular software synth.

Ever since its invention by Don Buchla, the LPG has been heralded for an ability to add a lifelike and organic response and textures to modular synth patches. With its A-101-2 Vactrol LPG, Eurorack instigator Doepfer took the concept a step further, adding a resonance filter for further sonic treatment. Today, thanks to Softube’s plug-in version for Modular, the module is available for any music creator that prefers working in the software realm.

As implied by name, Doepfer’s hardware LPG modules are based on vactrols — just like opto-compressors. The response time of these can vary wildly, which is all part of the LPG charm. Softube’s plug-in version of Doepfer’s design adds a Vact. switch, which was not part of the original hardware. This lets users switch between fast, medium, or slow (F/M/S) response times to cover the variation between individual analog units.

Doepfer’s A-101-2 Vactrol LPG hardware has been a longtime staple in the Eurorack world; now it’s a welcome addition to Softube’s Modular, the first truly expandable software modular system that looks, works, and sounds exactly like its hardware counterparts.

Doepfer A-101-2 Vactrol LPG is available now from Softube’s website and from authorized dealers around the world.
The list price is $39, but it is available at an introductory price of $29 until April 30, 2017.