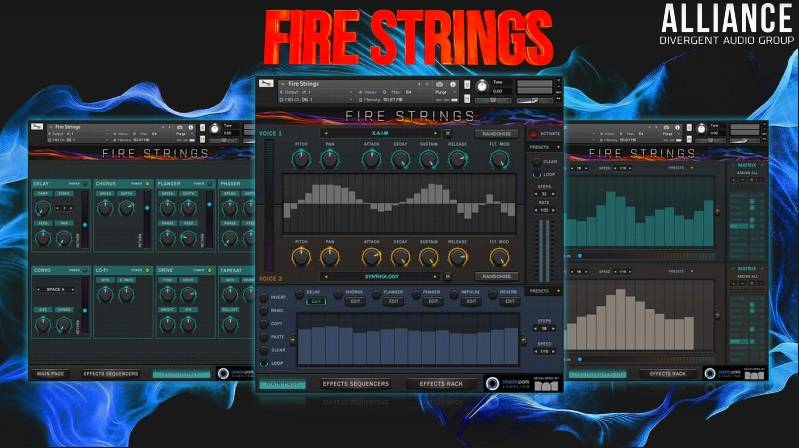 The library content is broken down into three main categories:

Tonal – This section of the library contains electric violin sustains and textures both of a traditional and extended nature. We dug very deep to push well beyond common technique. Here you’ll find everything from standard sustains and tremolos to the extremely jarring spectral scrubs, harmonics, trills, wild microtonal bends and vibrato.

Rhythmic – The rhythmic content consists of dozens of tonal, tempo-synced electric guitar grooves that serve as the perfect starting point for a cue. All grooves are mapped across several octaves and are freely transposable.

Each sequencer has advanced controls which allow you to change the speed, number of steps, direction, offset, fade-in, nudge and loop individually per sequencer. Each sequencer also has copy/paste functions, randomisation and built-in presets.

Fire Strings is an incredibly advanced instrument for Kontakt. Combine two sound sources and rhythmically swap between each sound or create rich evolving soundscapes with gradual modulation. There are also presets per sequencer so you can quickly select pre-built tools to add rhythm and variation instantly.

The 11 effects per sound can be controlled randomly or in positive or negative directions at the press of a button. The amount of control here is unprecedented and opens up a vast world of sound design capabilities.

$69 Intro Price(Goes to $99 on May 5th)
Available exclusively at Kontakthub.com here: Fire Strings