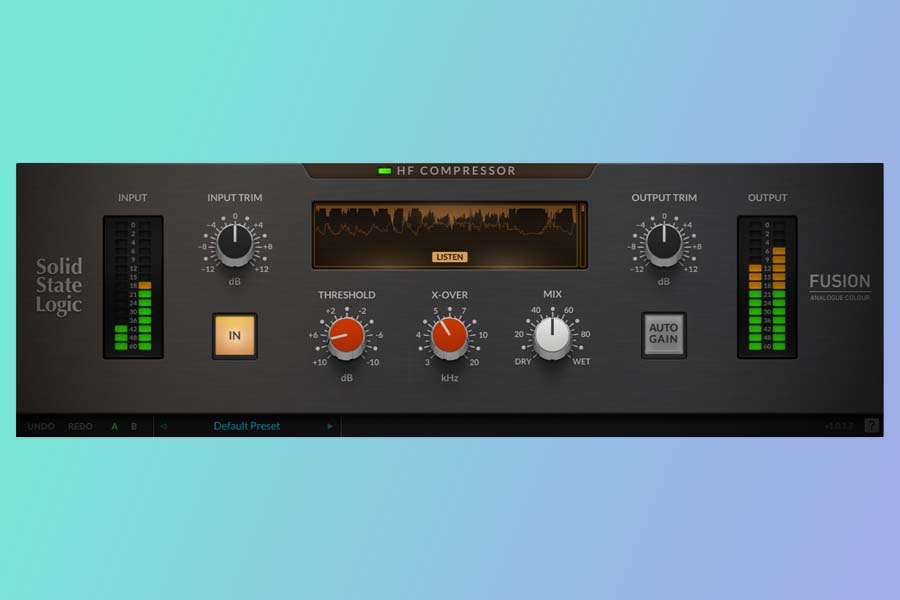 As on the original Fusion hardware processor, the new plug-in affects only the frequencies above the X-OVER, and is designed to deliver smooth compression and a tape-like high frequency roll off to tame unwanted harshness that can build up in a mix, or within individual stems. The HF Compressor’s ratio, attack and release controls are all optimised for maximum transparency.

In addition to the features of the original hardware, the SSL Fusion HF Compressor plug-in also introduces new MIX and AUTO GAIN controls, which respectively allow users to non-destructively dial in the perfect amount of HF smoothing, and smooth out high frequencies whilst maintaining their level. Combined with feedback from the Gain Reduction graphs, meter and circuit activity LED from the original hardware, quickly taming harshness whilst maintaining the presence of sounds is a breeze.

Out of the box functionality
Along with ECO mode for tracking and recording, which reduces latency and CPU load for tracking and recording, the SSL Fusion HF Compressor also introduces a brand-new feature of the SSL Plug-in Engine: built-in help. Simply click the question mark ‘?’ symbol in the bottom-right hand corner and mouseover the GUI for context-aware guidance and information about the plug-in and its controls. Meantime, the Gain Reduction History graph provides users with a detailed visualization on the effect of the circuit.