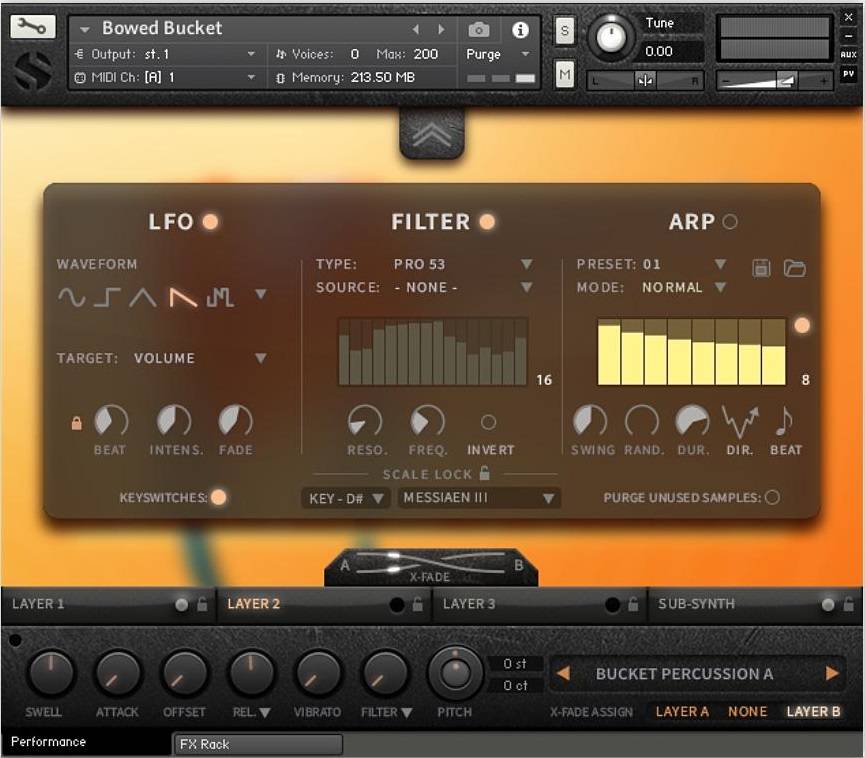 The Bowed Bucket is what happens when you hammer together a big fat instrument out of a 5 gallon plastic bucket, a wooden 4×4 beam, bass tuners and cello strings. The bucket was fitted with tuning lugs and then holes were drilled out to allow individual strings to pass through, using the bottom wall as the bridge, so that sound projected outward and down. Then a 4×4 wooden beam was affixed to the bucket and the strings were then stretched up the heavy wooden neck, roughly nailed in place and hand-tuned. Remember that old string and paper cup trick from when you were a kid? Yeah, think bigger.

We bowed it, plucked it, struck it with drumsticks in a close, dry setting to get tons of tonality, then programmed it into a living, breathing self-contained bucket band. After that, we manipulated all the raw material to create a variety of playable atmospheric pads and ambiences to bring out the full creative potential of this rather odd contraption.

Bowing the strings produces a surprisingly clean, yet rich and beefy sound, with plenty of growl, low end, and a nice clear bite. It’s sound is a little similar to an electric cello, but with a unique rawness and body. For our percussion, we simply banged on it like idiots, with results just as you’d expect – plastic bucket drums. We captured various bowed articulations from both inside and outside of the bucket. And of course, as a bonus, we’ve also created a variety of very cool lead, pad, ambient droning and FX presets to expand your creative options.