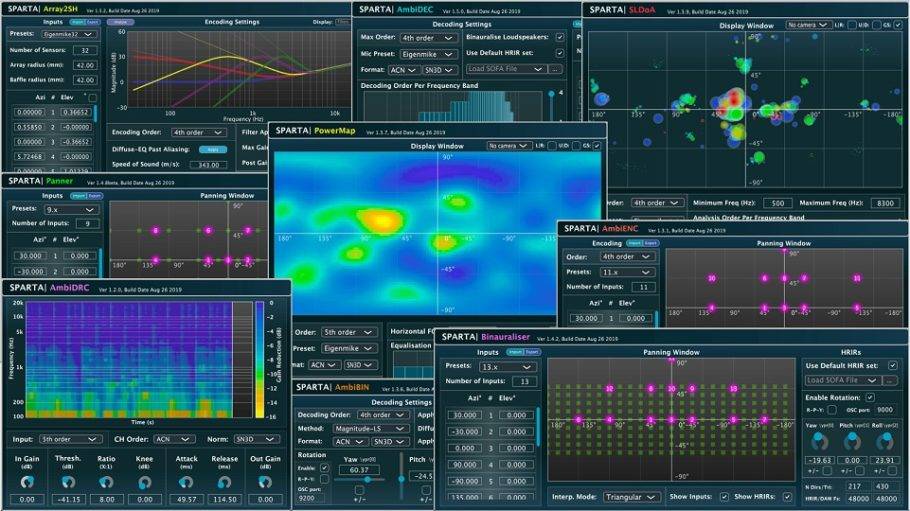 SPARTA is a collection of flexible VST audio plug-ins for spatial audio production, reproduction and visualisation, developed primarily by members of the Acoustics Lab at Aalto University, Finland.

In particular, this release sees the addition of 9 new plug-ins:
– compass_binauralVR: essentially, this is the same as the compass_binaural plugin, except it also supports listener translation around the receiver position and multiple simultaneous listeners.

– compass_spatedit: a flexible spatial editing plug-in intended to be used with 2 instances. The first instance you make of the plugin will allow you to specify marker directions and it will output the beamformed signals, which you can then equalise/re-balance/modulate/swap/modify as you wish. These modified signals can then be routed to the second instance of the plug-in. The ambient components of the first plugin are then also sent internally to the second plugin instance. The edited sound-field is then reconstructed and outputted by the second instance of the plugin.

– compass_gravitator: a sound-field focussing plugin affecting only the direct sound components in the sound scene. It essentially pulls sound sources towards user defined marker directions with a certain degree of “gravitational pull”.

– sparta_spreader: a source panner with coherent and incoherent source spreading options. While by default it loads HRIR data for binaural spreading, the approach is quite general; for example, you could also create synthetic microphone array recordings of spread sources if you wish, by simply loading a SOFA file of microphone array IR measurements instead.

– sparta_ambiRoomSim: a basic shoebox room simulator with Ambisonics output, based on the image-source method. Its main niche is that it supports multiple sources and Ambisonic receivers. The output audio for the receivers is stacked up to the 64 channel limit. e.g., you can have up to 16x1st order, 4x3rd order receivers, or 1x7th order receiver.

– sparta_decorrelator: a multi-channel signal decorrelator, which you can use to make reproduced sound scenes more diffuse when applied, e.g., after sparta_ambiDEC on the loudspeaker signals