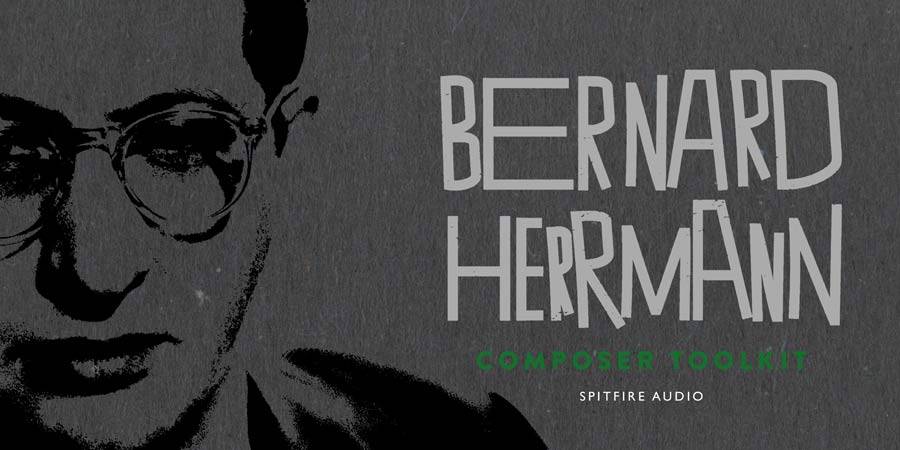 Spitfire Audio is proud to announce availability of BERNARD HERRMANN COMPOSER TOOLKIT — taking inspiration from the electric genius of its iconic composer namesake (noted for his lengthy legacy of fresh film scores such as Citizen Kane, Psycho, Vertigo, and Taxi Driver that continue to inspire today’s composers) when working exclusively with The Bernard Herrmann Estate to curate and assemble a unique set of studio orchestra ensembles informed directly by a legendary orchestration aesthetic recorded at London’s legendary AIR Studios (Studio 1) by Abbey Road Studios Senior Engineer Simon Rhodes (Avatar, The Grand Budapest Hotel, The Magnificent Seven) before being ‘translated’ to Native Instruments’ industry-standard KONTAKT PLAYER platform as an orchestral innovation for all.

“No composer contributed more to film than Bernard Herrmann, who, in over fifty scores, enriched the work of such directors as Orson Welles, Alfred Hitchcock, François Truffaut, and Martin Scorsese.” So stated Bernard Herrmann biographer Steve C. Smith. So when the opportunity arose for Spitfire Audio to collaborate with his estate, excitement throughout the cutting-edge company co-founded by working film composers was understandably palpable.

Putting the resultant BERNARD HERRMANN COMPOSER TOOLKIT into its rightful perspective, Spitfire Audio Director Paul Thomson touts, “This is an incredibly vivid, tense, and exciting collection of recordings. It covers all kinds of things, from more slightly standard orchestral instruments through to unusual combinations of orchestral instruments, some synths, and some more esoteric instruments in there as well. This is definitely not a vintage sound source, so we’re not looking at recreating the sound of movies of the Sixties. What we’re looking at is the inspiration of a giant of cinema. Bernard Herrmann’s career started with Citizen Kane and finished with Taxi Driver, and he did a colourful collection of Hitchcock movies in between. But not just that; he was also a very passionate advocate for new music, championing the careers of many composers who would never have been heard otherwise. We’ve taken his original scores from some of his key movies and we’ve looked at the way that he tended to combine instruments, and we’ve used that as the inspiration for how we’ve recorded this collection of sounds.”

So how, exactly, did the steadfast Spitfire Audio team set about recording what would become BERNARD HERRMANN COMPOSER TOOLKIT? Well, working exclusively with The Bernard Herrmann Estate to curate and assemble a unique set of studio orchestra ensembles informed directly by a legendary orchestration aesthetic, all duly decamped to Studio 1 within London’s legendary AIR Studios — complete with its unique AIR-custom Neve/Focusrite large-format mixing desk with 72 channels incorporating original ‘AIR Monserrat’ mic preamps and GML automation, alongside a 140m² fully-floated floor live room capable of accommodating up to 45 musicians — in the capable company of Abbey Road Studios Senior Engineer Simon Rhodes — who has a longstanding association with various composers, including the late James Horner whom he worked with for 18 years on over 40 projects including Avatar, the highest grossing film of all time — to capture players performing as Bernard Herrmann himself would have done had he still been working today… boisterous, lively, and upfront.

Unusual instrumental combis, selected groups, chords, effects, and much more are the supremely sampled order of the day with BERNARD HERRMANN COMPOSER TOOLKIT, tasty musical morsels served up in an easily accessible form from within Spitfire Audio’s already-familiar GUIs (Graphical User Interfaces) and organised as follows: STUDIO ORCHESTRA; HIGH STRINGS; HIGH STRINGS OCTAVES; HIGH STRINGS HALF SECTION; LOW STRINGS; LOW STRINGS AND HORNS; LOW STRINGS AND TROMBONES; PICCOLO AND FLUTES; CONCERT FLUTES; MIXED FLUTES; FLUTES AND CLARINETS; COR ANGLAIS, CLARINET, AND TRUMPET; OBOES, BASSOONS, AND HORNS; TRUMPET AND XYLOPHONE; HORNS; MID BRASS; TROMBONES; TROMBONES AND TIMPANI; HARP AND CELESTE; HARP AND VIBRAPHONE; ONDES MARTENOT; PERCUSSION; TIMPANI; and SYNTHS. Speaking of the latter, included in the ‘advanced’ folder are over 30 patches inspired by Bernard Herrmann’s use of synthesisers in combination with orchestral material, all of which can be controlled using Spitfire Audio’s Mercury Synth GUI, an ingenious interface initiating instant interaction without forcing users to delve deep under the KONTAKT hood; helpfully, all controls are assignable to (compatible) control surfaces, so users can quickly make Spitfire Audio’s synth sounds their own with minimal fuss.

Much fuss has been made about Bernard Herrmann, however. And deservedly so since he is one of the great modern composers, after all. His work for TV and film is nothing short of iconic, and truly synonymous with mid-20th Century cinema. Collaborating with Orson Welles on Citizen Kane (1941), Martin Scorsese on Taxi Driver (1976), and in longterm partnership with Alfred Hitchcock on scores such as Vertigo (1958), Psycho (1960), The Birds (1963), Marnie (1964), and beyond, the sheer magnitude of critical works is breathtaking. But not only did his work have a significant impact on popular culture at the time, more recently those works have been used to invigorate contemporary scores, such as Quentin Tarantino’s twist on the Twisted Nerve theme in 2003’s Kill Bill, 35 years after its inception — an eerie whistle which is now instantly identifiable worldwide.

But Bernard Herrmann demonstrated a unique and trailblazing compositional style throughout his celebrated career. His orchestrations were entirely original, daring, and inventive — albeit always appropriate for the context, so subsequently incredibly influential in film scoring. Psycho — famed for its strings-only approach — is an obvious example of a totally new way to score a thriller. The bold selection of specific instrumental ensembles — the infamous Torn Curtain featured 12 flutes, for instance — and choice of interesting combinations — harp and vibraphone in Vertigo; stopped horns and pizzicato strings in North by Northwest (1959) — challenged the status quo. Equally, experimenting with electronic instruments in scores — the Ondes Martenot in The Day The Earth Stood Still (1951) and amplified Moog synths in 1972’s Sisters and Endless Night — brought with them sounds previously unheard in cinemas. However, Herrmann also went as far as to affect change in the performance style of players, requesting that they did not play in the then-traditional, somewhat overblown nature that other Hollywood composers of the time tended towards.

Outside of his innovative scoring for film for which he remains best known, Herrmann had boundless curiosity and a genuine love of new music, championing the names of several composers who became household names as a result of his hard work as a conductor. As Chief Conductor to the CBS Symphony Orchestra, and the many radio broadcasts he made with them, he helped bring a huge variety of often little-heard music to the masses.

In short, Bernard Herrmann was a truly individual voice, an innovative individual who stood firm against what he saw as the dilution of the art form to which he dedicated his life. Little wonder, then, that his powerful presence continues to be felt so strongly so long after his passing, respected by and resonating with today’s film composing community. It is in this spirit that Spitfire Audio brings BERNARD HERRMANN COMPOSER TOOLKIT to bear on today’s ever-expanding compositional climate as an orchestral innovation for all. As Paul Thomson tellingly concludes — for the right reasons, it’s all in there for the taking: “Tons and tons of really great material, recorded in a tight, dry acoustic that is a very, very fine room through a lot of amazing mics by Simon Rhodes. It really is a wonderful-sounding library — hope you’re going to enjoy using this and looking forward to seeing what you come up with.”