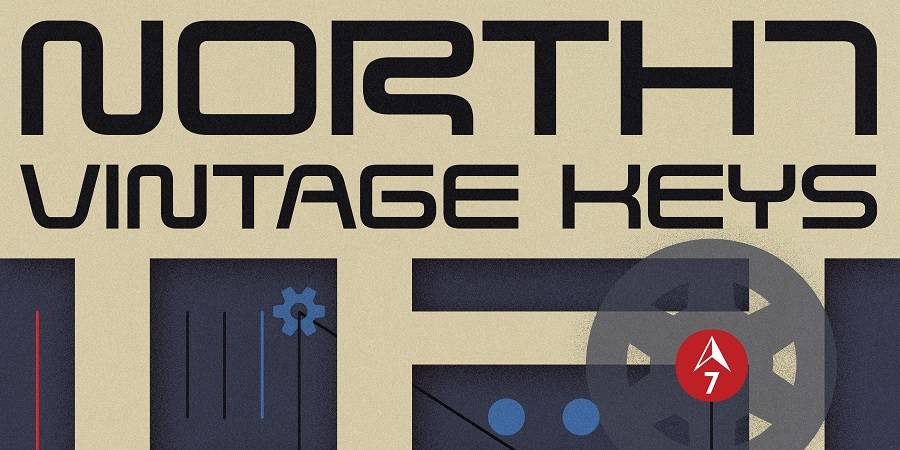 PP027 – NORTH 7 VINTAGE KEYS is the latest in Spitfire Audio’s lengthening line of popular Producer Portfolio products, providing producers, songwriters, and composers with raw, untreated instruments in a neutral space to make their own. Only a matter of time, surely, before the company collectively turned its creative hand to the well-trodden recorded route of vintage electric pianos and other curiosities after so much experimentation, research, and soul searching in its ongoing mission to produce the finest virtual instruments from the finest musical samples in the world. Would anything new be brought to the production table this time round? Really it boils down to this: Spitfire Audio always records everything with affluent abandon and by applying this ethos to several iconic keyboard classics it was felt that the company could make a difference by creating something completely different.

Producer Portfolio product-worthy, then, the resulting sample-based virtual instrument incorporates the SPITFIRE ELECTRIC PIANO (or ‘EP’), ELECTRIC CLAVINET (or ‘CLAV’), STAGE PIANO (a.k.a. ‘THE WURLY’), and ELECTRIC PIANO BASS (a.k.a. ‘FINGER BASS’), faithfully capturing the sound and spirit of those four vintage keyboard classics as a definitive, deep sampled, and magical musical rendering fit for purpose. Pushing for perfection, PP027 – NORTH 7 VINTAGE KEYS has been thoroughly tested by keyboard-playing professionals for the most realistic response to truly add a ‘Spitfire’ twist to the signature sounds of those well-established electric pianos.

Perfectly presented in Spitfire Audio’s proprietary eDNA engine — an instantly tweak-able interface that creates a new audio experience for next-generation music-makers by manipulating two sets of sounds thanks to some serious scripting, PP027 – NORTH 7 VINTAGE KEYS creatively provides users with an artistic license to take those tried-and-tested 20th Century sonic characteristics and warp them well into the future, Star Trek-style… well, into the 21st Century at any rate! Those not quite ready to take the plunge need not fear for Spitfire Audio’s ‘in-house funkateer’ and company co-founder Christian Henson — himself a keyboard player and composer of some serious standing — has helpfully stepped up to the musical plate with a whole host of deftly-designed presets, perfectly providing insight into the creative potential of this truly collaborative adventure.

“The bass keyboard section alone is worth the price of entry!” So says Christian Henson. He should surely know. Characterful, vibey, and, frankly, quite unlike any contemporary vintage virtual instrument library of its type, PP027 – NORTH 7 VINTAGE KEYS clearly provides the adventurous user with welcome scope to take those vintage classic keyboards and musically make them their own. Own it today and play… play with bringing the past to the present — or even the future!