Today we had the chance to talk with Axel Rohrbach, one of the founder and leader of Boom Library. Welcome Axel to this interview. You‘re a part of the company BOOM Library. What is BOOM Library doing and how did you come to the idea to build up this company?

Hi, thanks for having me here. At BOOM Library, we record and design high-end sound effects for use in games, movies, trailers and in general post-production. We started mainly because at that time in third party sound effect libraries we were missing rather raw but well edited recordings with a bunch of variations to be able to create unique sound effects for our daily work as sound designers. Additionally we couldn’t find any trailer-ish and creature related sounds that we haven’t used a thousand times already or that were simply at a quality level we were after. So we started to create our own libraries for our own work. At a certain point we just figured that other sound designers might most likely run into the same issue, so we thought: why don’t we make our work available to others out there as well ? That was basically the very beginning of the BOOM Library. 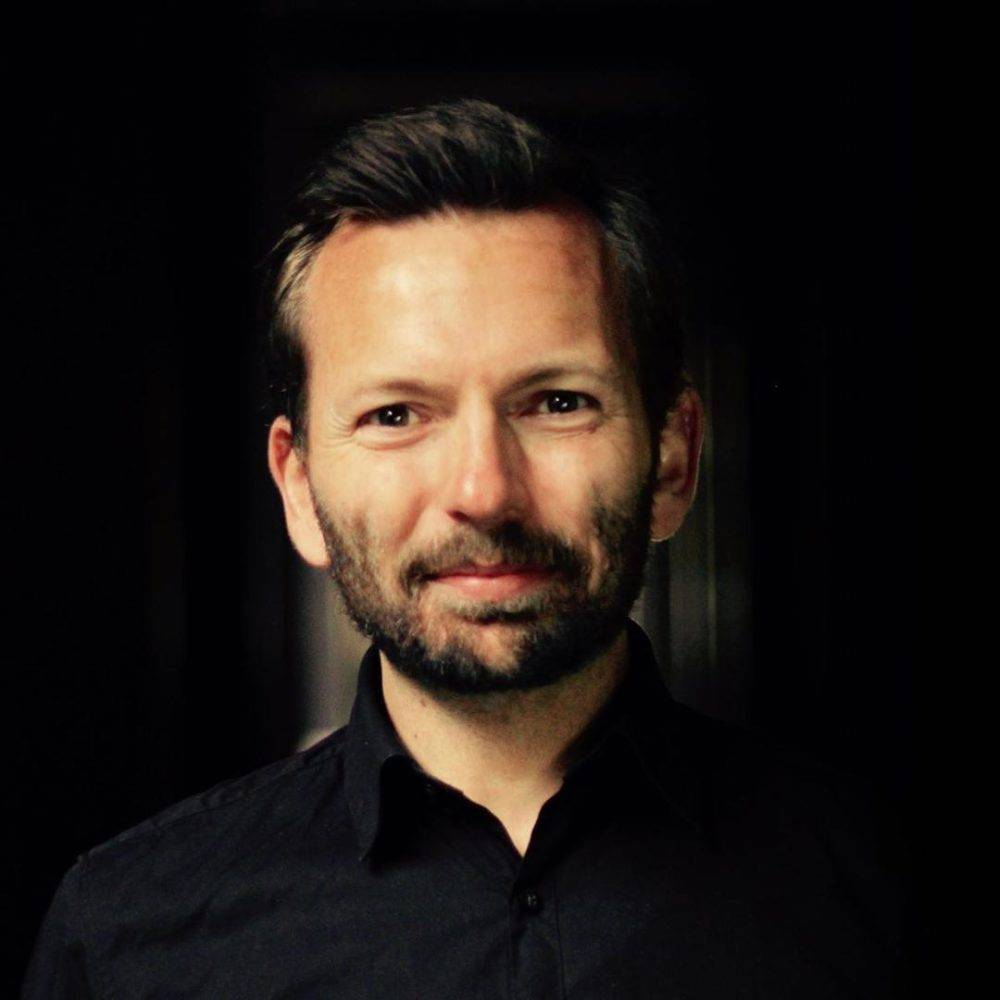 You‘ve recently released your new tuning plugin Enforcer. I‘ve checked the demo videos and descpription already and it looks and sounds very promising. Which kind of plugin is it and for which purposes could it be used?

Well, Enforcer is not at all a tuning plug-in. You can tune kick drums to a certain amount, but it actually is a plug-in which can add punch and low-end to percussive sound material. Simply put, it is a kick drum generator which gets triggered by an input signal. Producing extremely clean signals combined with a very precise detector Enforcer helps to pimp up percussive musical material such as bass drums, snares, toms etc as well as any kind of sound effect based on transients or impacts, for example machine guns, explosions, dinosaur stomps or simply footsteps. As for the tuning: you can add a sustain to an existing kick drum or entirely exchange a given kickdrum and tune Enforcer’s output by semitones – so yes, there is a tuning aspect to it ;-)

Is it possible to use Enforcer as a ducker too?

Enforcer has an option to duck the original input material in relation to the signal Enforcer adds or even remove only exactly the frequencies that Enforcer adds. Both is very important when adding low frequency to make room for the highly energetic low frequencies and to avoid a muddy, undefined mix. Because Enforcer has a dry / wet option, you can set it to 100% dry and thus only duck the input material. So yes, it can be used as a ducker as well. 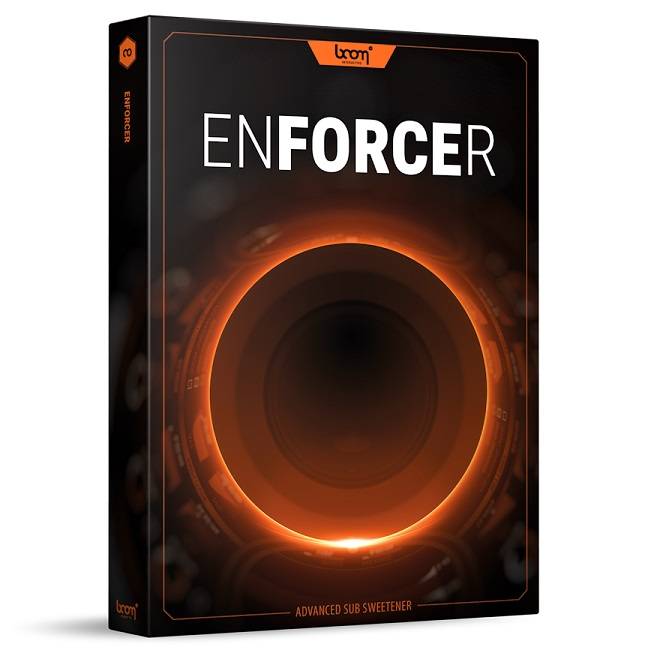 If I don‘t have much experience in music production, can I use Enforcer also as a beginner or do I have to be a professional sounddesigner with years of knowledge?

The envelope follower part of Enforcer only creates trigger points, the input envelope in fact does not control the Enforcer directly. This means it is rather transient related than an Envelope Follower and the original input envelope only determines, when Enforcer produces a fixed signal. This is important to get the low frequencies under control. The only thing a bit similiar here is the optional « Dynamic Gain ». This option alters Enforcer’s effect gain in relation to the trigger point gain of the input signal, resulting in a more organic but naturally less controllable outcome. This can help on very playful drums or very dynamic sound effects like footsteps.

What makes Enforcer different to other Envelope Follower tools?

Of course you can use Enforcer as a beginner as well. We created more than a hundred presets which gets you started right out of the box. The only thing important to understand is the detector. Depending on the settings, it might happen that Enforcer does not create any additional effect at all. So for beginners, I highly recommend watching all our YouTube tutorials, specifically the one explaining the detector https://youtu.be/NzO5NFlj_1k 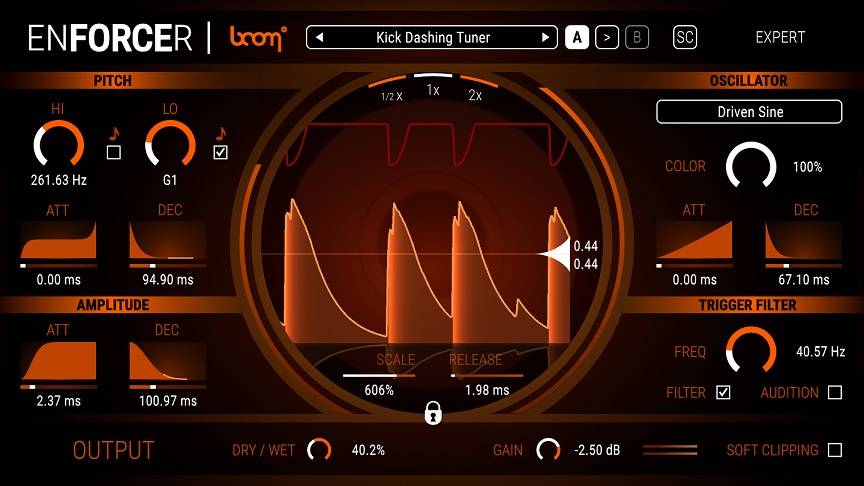 We do have two main stereo setups for microphones, one is a Sennheiser MKH8040 XY setup and the other one a Sennheiser MKH8050 and MKH30 MS setup. The MKH 8000 series has an extended frequency range. On high sample rates these are really fun to pitch down. We do have a wide variety of additional microphones, the usage really depends on the topic. We record on a Sonosax R4+ recorder, which offers an extremely high noise to signal ratio and in my opinion has an extraordinary detailed and smooth sound. In post production we use all kind of tools. From Pro Tools over Cubase, Logic to Reaper and Ableton Live. When we need to clean anything up our go to tool is iZotope RX.

How do you get your inspirations for developing new sounds and plugins?

For us it is really important that we not only create audio products, but also still work in the industry. Dynamedion (www.dynamedion.com) is our outsourcing company. One source of inspiration is that we are sometimes missing something specific for our daily work, be it workarounds, sounds or plug-ins. We then try to evaluate if we are able to come up with a solution that would help us and other professionals and make a BOOM Library product. This also works for internal Betatesting of the products – during the development of the plug-ins or sound libraries, we are already able to use them internally which helps to tweak and finalize our work within the libraries.
Sometimes of course we just have an idea, something we didn’t know we would need until it is there ;-) This is for example the case with the Turbine plug-in. We use it a lot for creative sound design, for anything Sci-Fi related, robotics, etc.

Which kind of products (soundeffect and foley collections or plugins) could we expect next from you?

Actually both. We just started to get some experience in the plug-in world. Luckily there are no bug reports coming in, so the products seem to be very stable. Of course we try the one thing everyone hates, putting the betatesting into the hands of paying users. It seems to pay off. We are eager to create more creative plug-ins or even simply little helpers. But the majority of products will still be sound effect libraries. We love going out and record all the different things we have in our portfolio. This will hopefully remain a part of BOOM Library for as long as it exists. 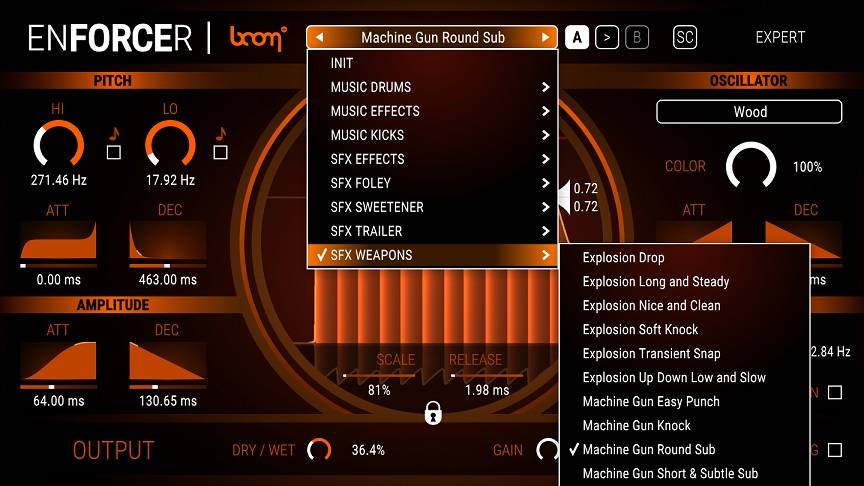 The Original BOOM Library SFX are being used by well-known companys for post-production in games and films etc. Do you know in which films or studios your sounds are being used? (maybe you can name some of them)

Unfortunately we may not talk about any upcoming projects that use BOOM Libraries. However, we collected some of our credits and clients that have been using our work here: https://www.boomlibrary.com/credits/ To give a little excerpt of our client list, here you go: Netflix, Marvel Studios, Blizzard, Apple, EA, DICE, Ubisoft, Nintendo, Sega, 20th Century Fox, Amazon, HBO, Warner Bros., Universal etc.

I‘ve heard you‘re doing an exclusive give away for the Noizefield readers, by winning a free licence of Enforcer. What need people do to have a chance to win ?

Yes, we offer a free license of our Enforcer plug-in. To enter the raffle, simply „like“ the following posts:
Enforcer Give away - Win a licence for free!
Noizefield BOOM Library Interview
We will randomly select one user by end of April. Until then, everyone can visit the Enforcer product page and grab the fully-functional 7-day free trial : https://www.boomlibrary.com/sound-effects/enforcer/

Now you‘ve got the chance to tell us something that you always wanted to say:

Oh, yes. One hint when recording fire: If you think you placed your microphone & windshield in just the right distance to the flames: Double the distance. It will save you money ;-)