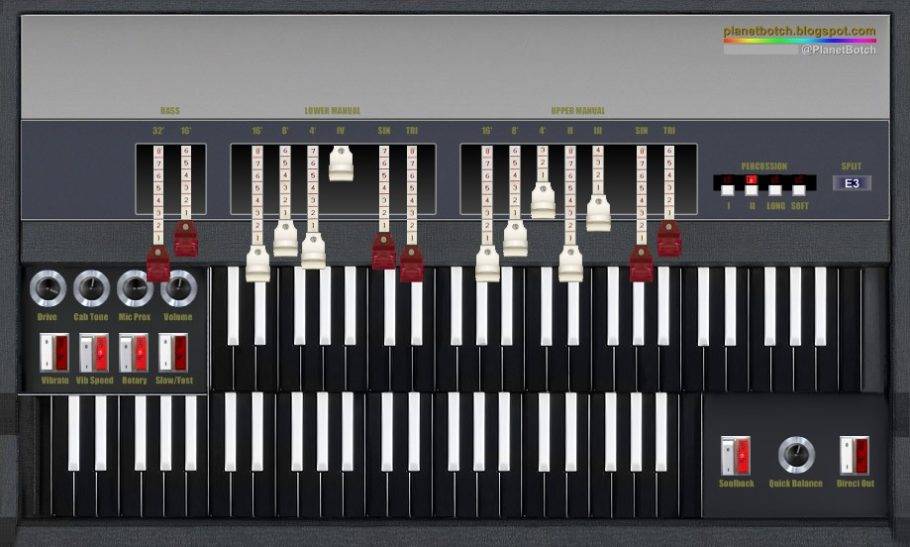 The Undercult is a VST organ model inspired by the Vox Continental Super II. It’s the first in a series of FREE public releases from a formerly private and exclusive collection of all-synthesized VSTis with exceptional sound quality and special features…

The Undercult has two independent, virtual 49-note manuals, splittable at any point across a 61-note keyboard span. Everything runs on the same MIDI channel – you just define your split point on the console and play everything from a single keyboard.

The Undercult additionally incorporates bass pedal sounds on the lower virtual manual. When engaged, the bass will always track and replicate the lowest note in any chord you play below the key split point, adding great substance and depth to a solo performance.

The Vox Continental Super II could produce different sounds from the regular Vox Continentals, due to its five drawbar system on the upper manual. Regular Continentals grouped all footages above the 4’ onto one bar. But the Continental II split the 5 1/3’ and 1 3/5’ footages from the 2’, 2 2/3’ and 1’, giving access to some more subtle tones.

This model differs from regular Vox Continental clones in that it simulates two amp types, including a realistic, hard-driven rotary speaker. There’s also a nifty ‘Soulback’ feature, which sets the drawbar foldback to the classic Hammond B3 cutoff points, for a subtle but vital tweak to the solo sound in the upper registers when the rotary is engaged. Enhancing the solo capability further, the output volume is re-scaled to produce a lift on higher notes, and the new ‘volume feel’ algorithm creates the sense of loud playing at any level.

In addition to the two amp models, there’s a raw sound output. The raw (Direct) output is there for those who want to use their own amp modelling and/or effects. But be warned – you’ll be hard-pressed to find a better VST rotary than the one built in. The amp model used when the rotary is not active, is based on the tone of my 1960s Vox AC30. It gives a fuller, rounder and more balanced tone than the raw (Direct) sound output. You can select from two vibrato speeds.

The Undercult – Free VST Organ by Planet Botch was last modified: May 9th, 2020 by Carl