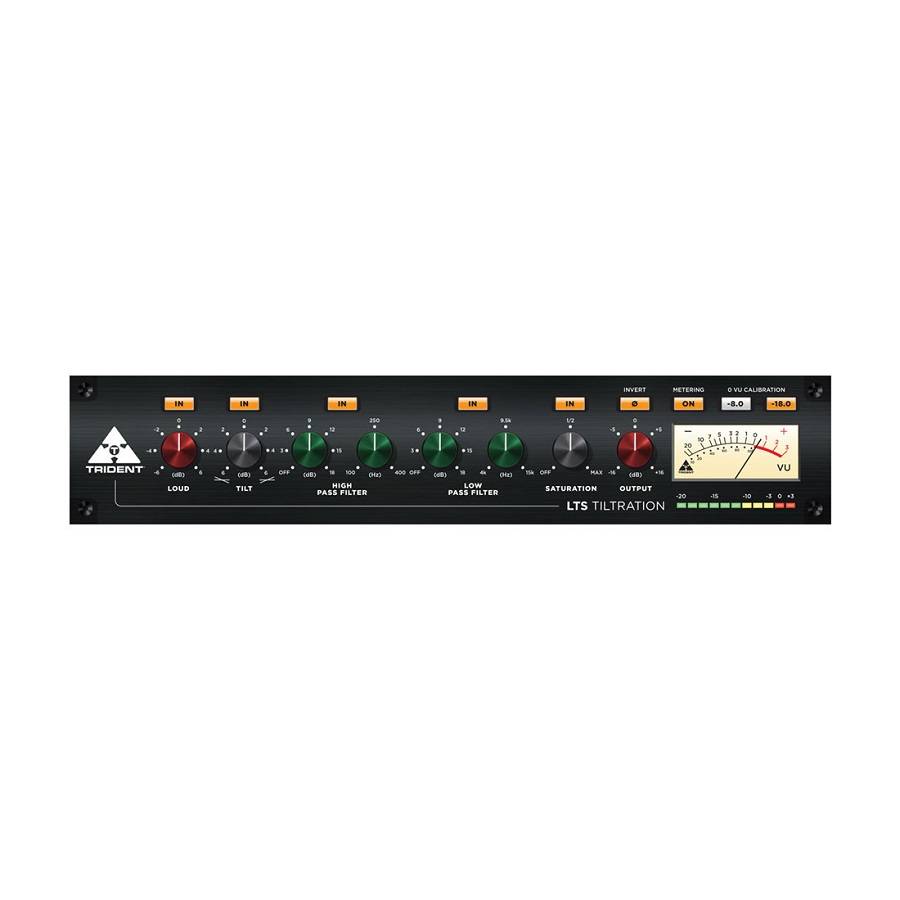 The LTS Tiltration from Trident Audio Developments is an entirely new design concept, incorporating multiple features from our various brands to bring another unique plugin to the pro audio market.

The Tiltration combines a newly designed Saturation processor, utilizing 8x digital oversampling to provide authentically modeled Trident harmonic distortion on any audio source. Onboard you will find a dual-stage Tonelux Loudness and Tilt EQ for enhanced flexibility. Additionally, we incorporate Sallen-Key variable High & Low Pass filters, with continuous variable slopes of up to 18 dB, all of which come together to provide unparalleled versatility and creative control. A unique VU meter, with switchable 0 VU calibration between -18 or -8 dBFS, assists in achieving optimal recording levels, while a PPM peak monitor detects transient signals and alerts to 0 dBFS clipping. A new double-click function allows you to display and manually enter data into each control knob making your frequency selection, as well as boost and cut, faster and more accurate. Finally, an output gain control and polarity selector round out the feature set, making this plugin a great tool for many different studio applications.

USES:
The Tiltration can be used in countless applications, from adding lush harmonics to your digital tracks for added warmth or even to add distortion to your guitar, bass, or vocal tracks for an analog effect. The variable-slope high and low pass filters add further control, helping to create completely different sounds and musical tones. Adding the dual-mode Tilt and Loudness EQ can add sparkle to any dull tracks easily with just one turn of a knob!

Every feature on the Tiltration has a bypass control that allows you to use each feature independently and quickly allows you to audition your changes, or bypass those you do not want to use.

For those who already have our Trident CB-9066 and Series 80B plugins, adding the TILTRATION adds another dimension when used in tandem with the EQs by adding harmonics and advanced tone-shaping, giving you the ultimate EQ chain.

Trident Audio Developments Plugin software models make an impressive addition to any digital audio workstation (DAW) application, on either Mac or PC. Available in VST3, AAX, AU (Mac only) formats, and PC Platforms.
Downloaded separately, Mac and PC versions may be installed as a free 7-day trial prior to purchasing and activating a license. A purchased license can be used on up to two systems or activation locations, on either Mac or PC.
The Digital Editions Series Tiltration uses our ground-breaking modeling techniques, and our new AWA (Advanced Wave Analysis), Trident’s proprietary DSP engine.
Taking full advantage of this signal processing technology ensures every Trident Plugin is true to the original brand and provides the most efficient and least CPU demanding Plugins available today, meaning multiple instances of Trident Plugins may be run at any time, with the least possible negative effect on your computer’s performance.