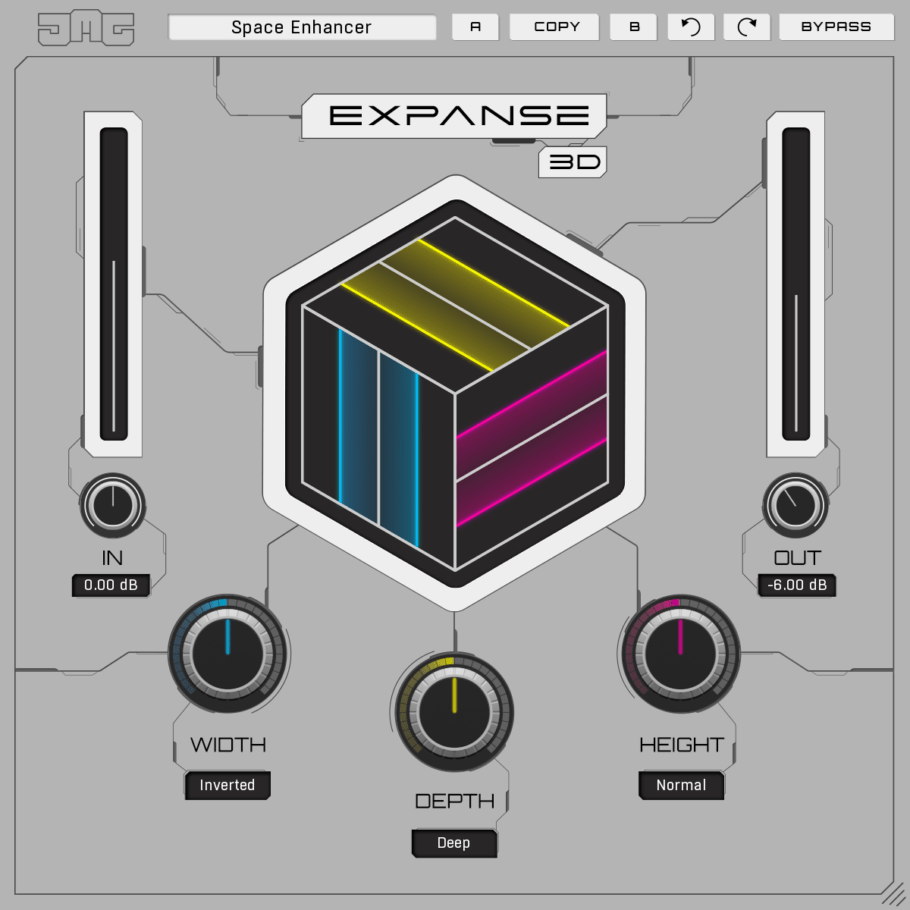 It is widely accepted, flat-earthers notwithstanding, that the world is not flat — after all, the idea of a spherical Earth was first floated around by ancient Ionian Greek philosopher Pythagoras around 500 BC and validated by ancient Greek philosopher and polymath Aristotle a couple of centuries later, so why settle for flat-sounding music-making when fast-forwarding millennia to today’s DAW-driven production world? Which was exactly the thinking behind Expanse 3D, the latest plug-in from United Plugins founding partner JMG Sound, specialising in making use of complex audio processing techniques but balancing them with easy-to-use controls, as established in its previous products, Hyperspace, Transmutator, and Orbitron. Or, quite literally putting it into words, WIDTH, DEPTH, and HEIGHT (with two, three, and four associated algorithmic modes to respectively choose from), as well as the self-explanatory IN (controls the input gain with a range of -24dB to +24dB) and OUT (controls the output gain with a range of -24dB to +24dB), in the case of Expanse 3D, which applies a liberal dusting of psychoacoustic magic to achieve the three-dimensional feel focused in its appropriate appellation using a combination of analogue-type saturation, spectral phase offsetting, re-synthesis, intricate delay networks, and more, making it a perfect candidate for mixing, mastering, and sound design — duly helping to glue sounds together while creating contrast and definition between sounds in a mix.

WIDTH is an advanced spectral phase processor for creating extended width while remaining natural and transparent. Tight bass is achieved by reducing stereo from the sub while widening progressively up to higher frequencies. Furthermore, it is fully mono compatible while preserving position focus, and can generate stereo from mono. This time there are two modes to choose from — Normal and Alternate, albeit both work in much the same way but with different frequency points, and each mode has a normal and an inverted implementation. In essence, grouping elements in a mix might be better served by sharing the same mode. More commonly, different modes can be used when wishing to separate elements — such as guitar and piano, for example — so that they will not share the same frequency offsets.

DEPTH — a complex algorithm of delay networks with channel and phase processing — enhances the perception of depth and adds space. Speaking of which, this can be used to add dynamic contrast between separate sounds and glue multiple elements together for a more cohesive mix. Modes available here have different delay times in the algorithm — namely, Normal, which will work best on the majority of sounds as a default; Tight, which uses shorter delays, so will work better for percussive sounds, such as drums; and Deep, which uses larger delays resulting in a deep effect better suited to sounds with a soft attack, such as pads.

HEIGHT helps make sounds larger than life by extending out the highs and low end. Expanse 3D generates additional harmonics to deliver deeper bass and brighter treble — unlike traditional EQ that boosts existing frequencies. Furthermore, it greatly improves the perception of low frequencies on speakers less able to produce them while adding controlled power and punch to larger systems. Any audio exhibiting little low- or high-frequency content may be relatively unaffected by HEIGHT; however, this can be compensated for by extending the range of the processor with the associated Ext. Lo+Hi algorithmic mode; it stands to reason, therefore, that Ext. Lo assists audio with little bass and Ext. Hi assists audio with little treble, while — for the most part — Normal will be the best choice, especially for full mixes.

Those three dimension enhancers each implement finely-tuned saturation in their processing. By being modelled on analogue distortion, all nuances such as harmonic distribution, dynamic consistency, and non-linear randomness are captured to add beautifully rich and warm colour, assisted by anti-aliasing algorithms. All Expanse 3D processes are applied to the appropriate frequency ranges using high-quality filters causing zero phase shift with no latency, making them suitable for mastering.

Indeed, impact and energy can be greatly improved when mastering using Expanse 3D, with up to 8x oversampling providing the highest quality saturation to add analogue colour, while the additional harmonics help add clarity. As a result, the whole mix gently becomes more cohesive as the parts share a common space, all of which can be perfectly balanced while retaining the original loudness using the right-click-menu-accessed Auto gain function that measures the loudness of the input and adjusts the output to match — useful for avoiding the ‘louder sounds better’ dilemma.

Defining tracks is at Expanse 3D’s core, of course, creating contrast between musical elements by positioning them in the three-dimensional space, whether widening two sounds with one inverted to separate them, creating dynamic depth between deep and shallow sounds, or brightening sounds to make them stand out from the crowd — all helping to further define the individuality of each part that makes up a complete-, dynamic-, and full-sounding mix.

Thanks to the intelligent way all JMG Sound plug-ins manage bypassing while also compensating for latency to ensure that bypass states are perfectly in sync with each other, there is no need to worry about clicks or harmful noises when Expanse 3D’s bypass parameters are automated. And just like its Hyperspace, Transmutator, and Orbitron siblings, Expanse 3D also intelligently detects whether it makes sense to perform processing at all by temporarily turning on sleep mode if no processing is required, reducing CPU (Central Processing Unit) usage to almost nothing, so saving valuable computing resources for other processes.

Promoting massive-sounding music-making with easy-to-use controls through to CPU saving… Expanse 3D does it all (and more) — with a little help from the latest developments in psychoacoustic processing. Put it this way: working with Expanse 3D on any DAW-driven production is an intelligent musical move in itself!

JMG Sound’s Expanse 3D is available to purchase for a time-limited introductory promo price of only €29.00 EUR until May 31, 2021 — rising thereafter to its regular price of €99.00 EUR — as an AAX-, AU-, VST-, and VST3-compatible plug-in (using internal 64-bit audio processing capable of handling any sample rate) directly from United Plugins here: United Plugins – Expanse3D(A 15-day, fully-functional trial version for macOS 10.10 and newer and Windows 8/10 can be downloaded for free from here: Download)

Note that no iLok, dongle, or internet access is required for Expanse 3D activation. (All United Plugins software uses license files for activation and owners can freely use purchased software on all their computers as long as they are the user.)