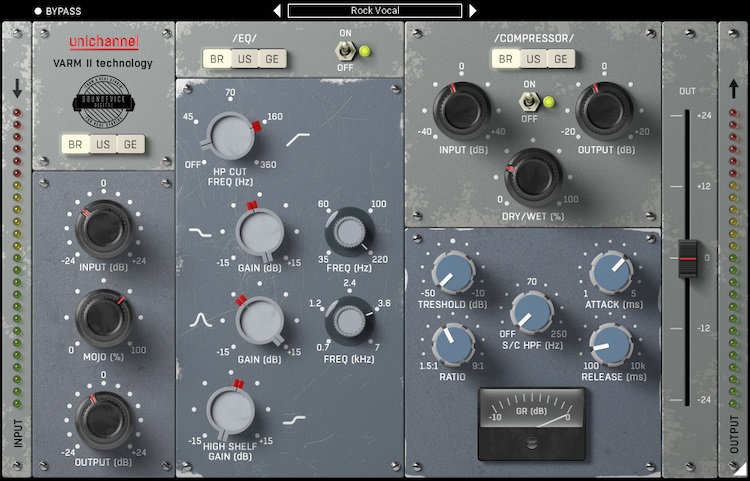 United Plugins is proud to announce availability of UniChannel as the latest plug-in from founding partner SounDevice Digital — duly delivering a universal vintage-style channel strip for every purpose, offering over 27 combinations of preamps, EQs, and compressors, each with a unique character and all allowing the welcomed warmth of analogue sound to truly shine through thanks to VARM II technology that results in the truest representation of hardware counterparts, connectable to every channel of a mix… unlike those hardware counterparts.

Inspiration in variety is what SounDevice Digital’s UniChannel, ultimately, is all about. After all, accessing a handsome hardware-based gear collection while working in the studio is, indeed, inspirational and a nice thing to have, obviously; it is, unfortunately, also a time-consuming — not to mention expensive — route to take in today’s time-stressed reality. But Boris Carloff — owner of the Prague-based SounDevice Studio after which the established brand that is central to United Plugins is notably named — knows this only too well, having been collecting vintage gear for over 20 years. Yet there is a method in his — some might say — musical madness. “There is always something not working — from tubes to scratchy pots and meters to noisy caps,” concedes the man himself, before adding: “And the units are so rare that you can hardly ever use them on multiple channels simultaneously. So, to avoid these limitations, we were inspired to create a solution that brings the best of these devices into one plug-in. The result is UniChannel.”

UniChannel duly delivers the welcomed warmth of analogue sound, but — unlike its hardware counterparts — it can be connected to every channel of anyone’s mix. Moreover, users can also change the components with one onscreen click, rather than resorting to yesteryear’s super-slow ‘old school’ screwdriver and patch bay workflow. With the UniChannel plug-in, therefore, there is a preset for every occasion — with no ageing and/or broken components to maintain and/or replace.

But better still, the UniChannel plug-in comes complete with no fewer than three types of preamp, three types of EQ, and three types of COMPRESSOR clearly on-screen, on tap at all times. Together, that makes for a total of over 27 unique ‘plug-ins’ readily residing within one. On the face of it, bypassing the EQ or the COMPRESSOR allows anyone to hear that the variety of sound on offer is almost infinite — inspiration in variety abounds, in other words.

With the VARM II technology — based on knowledge of chaotic behaviour and randomness of the analogue (real) world — that resides at the core of UniChannel, each plug-in instance acts slightly differently, due to that technology’s modelling of the subtle differences in the values of the electrical parts themselves — exactly as is the case with the real-world electrical parts constituting console channels. Consequently, this results in the truest representation of the hardware units concerned’s sounds.

Speaking of those sounds, the UniChannel plug-in’s preamp, EQ, and COMPRESSOR sections are all switchable between BR (British), US (United States), and GE (German) flavourings. For example, that classic British channel switching brings about a fat-sounding transformer colouring for aggressive bass, kick drum, and rock attitude; it includes a Seventies-style British fat-sounding transformer preamp, a Seventies-style EQ, and a Seventies-style diode bridge compressor. Conversely, the US Eighties-style op amp preamp and Eighties-style EQ exhibit mid-sounding punch — perfect for electric guitar or toms, while the US early-Fifties-style tube compressor is a fat-sounding monster, making vocals sound silky smooth with wonderful colour to boot. But the full- sounding German channel works wonders on the drum buss and sounds so magical when applied to the voice that SounDevice Studio engineers do not recommend using anything else for jazzy stylings or ballad intimacy; it features a Fifties-style tube preamp, Sixties-style rare EQ, and early-Fifties-style tube vari-mu compressor.

Clearly, it is also worth mentioning that the photorealistic nature of the UniChannel plug-in’s gorgeous GUI (Graphical User Interface) imbues its users with a feeling that they are touching real-world hardware. However, it easily adapts to their needs since they can always drag the arrow at the bottom-right corner to change its size — smaller to save precious ‘screen estate’ or larger to make it easier on the eye and, as a result, easier to use.

Ultimately, UniChannel provides maximum audio quality by using internal 64-bit audio processing as well as being able to handle any sampling rate — as, indeed, is the case with all plug-ins released under the United Plugins umbrella, so why not try it at 192 kHz… or even higher! Helpfully, the UniChannel plug-in intelligently detects whether it makes sense to perform any processing at all — if not, it temporarily turns on sleep mode, meaning it requires virtually no CPU (Central Processing Unit) power at all, thereby saving computing resources for other processes.

Put it this way: with UniChannel, Boris Carloff and the talented team at SounDevice Digital have surely succeeded in their collective mission of making inspiration in variety a reality in one plug-in that duly delivers a universal vintage-style channel strip for every purpose, offering over 27 combinations of preamps, EQs, and compressors, each with a unique character and all allowing the welcomed warmth of analogue sound to truly shine through.

SounDevice Digital’s UniChannel is available to purchase for a time-limited introductory promo price of only €33 EUR until the end of November 2021 — representing an attractive 78% discount, rising thereafter to its regular price of €149.00 EUR — as an AAX-, AU-, VST-, and VST3-compatible plug-in (using internal 64-bit audio processing capable of handling any sample rate) directly from United Plugins here: United Plugin – UniChannel(A 15-day, fully-functional trial version for macOS 10.10 and newer and Windows 8/10 can be downloaded for free from here: https://unitedplugins.com/download/)

Note that no iLok, dongle, or internet access is required for UniChannel activation. (All United Plugins software uses license files for activation and owners can freely use purchased software on all their computers as long as they are the user.)