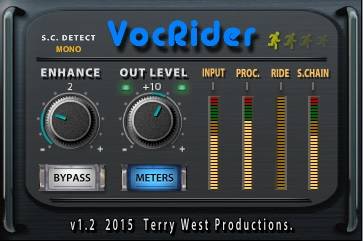 There’s a new update of the free VST-plugin VocRider from Terry West Productions available. has released. It’s a good tool for vocal level-control. Maybe you’ve got a massive guitar or leadtracks in your mix, and they’re knocking off your vocal track, so VocRider will automatically try with the input detector, that the vocaltrack won’t be covered. VocRider is a 32 Bit plug-in for windows. You can download it for free under the following link.

VocRider VST-update for free was last modified: May 9th, 2015 by Carl