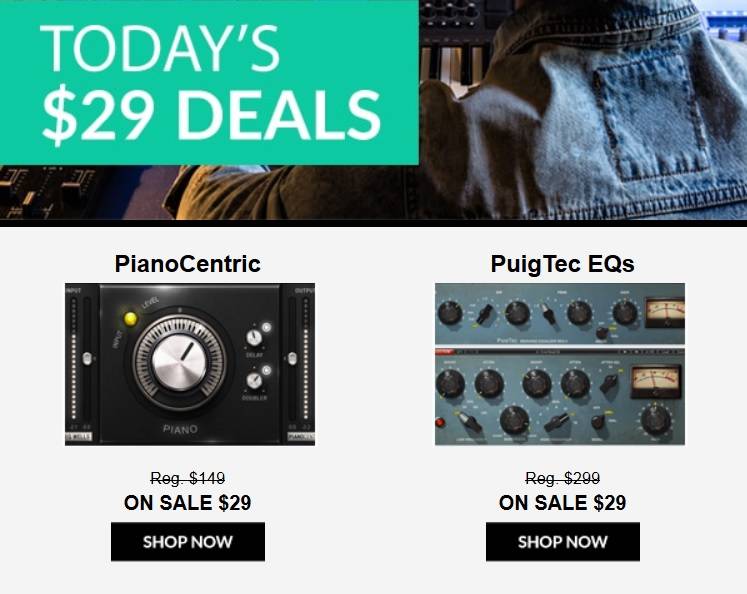 For the next ~24 hours there is a quite good deal at waves where you can grab the PianoCentric and PuigTec EQs plugin for just 29$ each.

The piano can be a tricky instrument to mix due to its wide frequency range and varying dynamics. No one knows this better than multiple GRAMMY®-nominated producer, songwriter, musician and mixing engineer Greg Wells (Adele, Katy Perry, Mika, One Republic, Twenty One Pilots), who has songs on over 85 million units sold, and who is himself an accomplished pianist and piano aficionado.

PuigTec EQs
The Pultec EQP-1A is renowned for its unique ability to boost and cut the same frequencies simultaneously, thereby creating a resonant shelf. The PuigTec EQP-1A is a remarkable replication of the original hand-crafted unit owned by iconic producer/engineer Jack Joseph Puig (U2, Rolling Stones, Lady Gaga) and heard on dozens of popular recordings by Weezer, Black Crowes and many more.

The distinctive tonal characteristics of the MEQ-5 have made the original Pultec hardware a mainstay at high-end studios for decades. The midrange PuigTec MEQ-5 and the broadband PuigTec EQP-1A together comprise a full range vintage EQ chain.

Waves PianoCentric and PuigTec EQs for just 29$ each was last modified: October 5th, 2017 by Noizefield