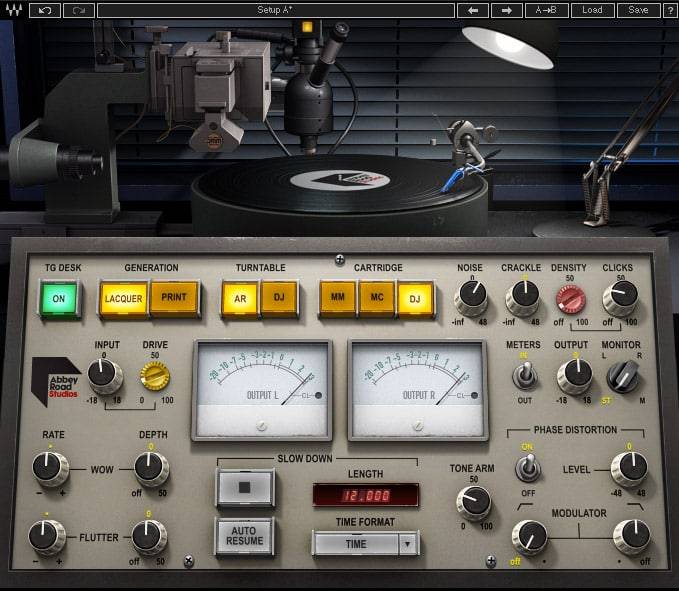 Give your music the vintage warmth of vinyl records played on classic turntables and needles: a precise model of Abbey Road Studios’ vinyl cutting and playback gear.

There are few things in music that capture the emotion of diehard fans more than vinyl. The retro feel of a record, combined with the analog warmth of its sound, makes vinyl a beautiful nostalgic statement.

Designed with Abbey Road Studios, this plugin faithfully captures every stage of the vinyl production and playback process: you can choose between the sound of a pure acetate (lacquer) cut or the print master vinyl pressing from the factory; play the records on two distinct turntable types with a choice of three classic cartridges; and even add the EMI TG12410 mastering console on the path into the vinyl lathe.

For added authenticity and creativity, Abbey Road Vinyl even lets you move the location of the tone arm across the record, changing the frequency response and distortion like in the real world. You can also add vinyl noise and crackle, apply a gradual slow-down/stop turntable effect, and add wow and flutter effects for extra analog warmth.

Abbey Road Vinyl is the long-awaited tool for diverse audio users: from mixing engineers craving a distinct smooth sound, to electronic and hip hop artists who cherish that “needle” touch, to sound designers reaching for authentic vinyl qualities and producers seeking a true-to-vinyl dimension on their tracks.