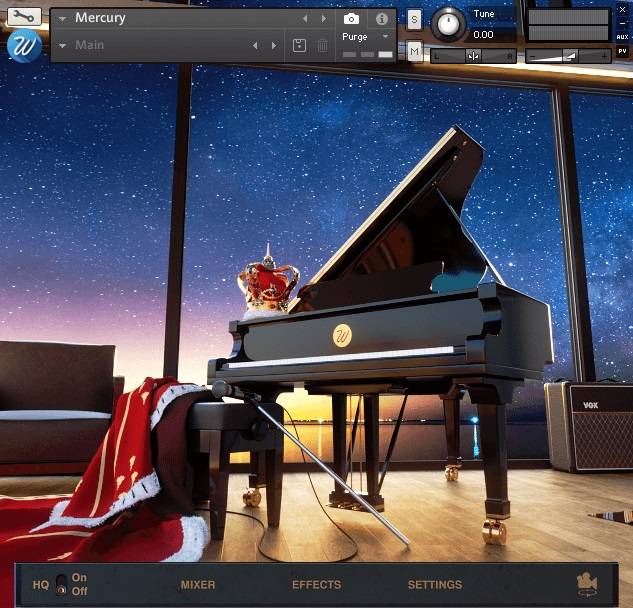 This long and winding road to sampling glory began before then, though, so who better to lead us into temptation than Wavesfactory founder Jesús Ginard. “I’ve been a Queen fan since I was a little boy,” begins the perfectionist. “I remember listening to the Made In Heaven album on cassette and being absolutely amazed by it. That album totally changed my musical perspective. Fast-forward to 2014, I saw that Metropolis Studios had uploaded a photo of a nice Fazioli piano in one of their studios, stating that it’s ‘…the Freddie Mercury piano.’ I know Queen recorded their last albums there, so I asked, ‘Is this a regular piano named after Freddie Mercury or was it actually his piano?’ They answered: ‘This was his piano.’”

Fast-forwarding this significant sampling story a little further finds Jesús Ginard travelling to London in November 2015 to sample Freddie Mercury’s Fazioli F228. “It was a dream come true — a dream I didn’t want to become a nightmare,” notes the talented Queen fan, before adding: “Apart from the fact that this was Freddie’s, the studio and the sound was really magical. If done well, I thought that this could be the perfect piano library — not only for Queen fans, of course!”

Fortunately for Wavesfactory, Metropolis’ renowned recording engineer Paul Norris helped make sure that Jesús Ginard’s dream was well on its way to becoming true at the recording stage alone, as evidenced by being captured on candid camera, talking through his technical approach to capturing that famous Faziolo F228 sound: “We’ve got three sets of close mics. The first is our ‘pop’ pair — Sennheiser MKH 40s into API mic pres; our second is a pair of [Neumann] KM 84s — sort of outside the lid, which are our sort of classical pair — into a pair of Neve 1081s; and our third is a mono Coles mic, for a sort of retro sound, using a Meris mic pre, which is based on an older API mic pre. Then there are two sets of room mics — first, we’ve got a closer pair, which are Neumann U87s, and then a longer, further away pair, which are Telefunken AK-47s. We also have two plates here at Metropolis that we’re using — one is solid state and one is a valve plate, and we’ll take an impulse response of them as well to have them available as different reverbs.”

Recording a total of 80GB of content at Metropolis, Jesús Ginard’s return home heralded working long and hard to perfect Mercury. “I put as much care into the editing, design, and scripting process as I was capable of,” he explains. “Everything needed to be perfect. The library couldn’t just score 7/10; it had to be 10/10.”

One year later… the magical-sounding Mercury is ready. After the editing process was completed by sample-cutting supremo Elan Hickler of Soundemote, the final file size was 60GB — down to 34GB when finally served up as 38,000 superlative samples in Native Instruments’ NCW (Native Compressed Wave) format (designed to save an imported .WAV audio file using compression so the file uses less disk space). Scripting alone took around nine months to complete, bringing about some features not yet seen on other sample-based virtual instruments, paying particular attention to the most minimal details to make it the perfect piano library, as had been Jesús Ginard’s dream from its inception.

Meanwhile, Mercury looks as amazing as it sounds, thanks to a gorgeous GUI (Graphical User Interface) created and rendered in 3D by Voger Design, designers of high-end, user-friendly interfaces for audio applications. Accessible via its inspirational MAIN page — replete with a knowing nod of 3D rendered reverence to Queen frontman Freddie Mercury’s classic crown and king’s robe stage outfit, Mercury’s MIXER page permits independent control of each of those perfectly-positioned (ULTRACLOSE, CLOSE, MONO, MID, and FAR) Metropolis mics with parameters usually associated with an audio mixing console for ‘position enhanced’ mixing; the EFFECTS page allows four DSP (Digital Signal Processing) effects to be added to the sound, including two (EMT 140) METROPOLIS PLATES — switchable between Valve and Solid State settings with Pre Delay, High Pass, Low Pass, and Wet controls, together with switchable settings for Short, Mid, and Long reverb times — alongside controllable COMPRESSOR, EQUALIZER, and CHORUS; and, finally, the SETTINGS page permits creative control of any parameter any user might conceivably choose — from ROUND ROBIN settings (up to 12x with Neighbour Borrowing) to NOISES, such as sympathetic resonance (Reso) and Pedal, plus much more besides!

But sound is where the art is, surely, so how does Mercury sound? Sophisticated, delicate, yet with a very rich bottom-end and a lot of body resonance — just like its inspirational namesake Fazioli F228 grand piano, put through its paces by musical maestro Freddie Mercury on a number of notable recordings. Thanks to Richard Norris’ sterling engineering work at Metropolis and subsequent months’ multi-talented editing to perfection, it has been captured with so much detail and depth that Mercury users can change its sound in so many different ways while always retaining natural-sounding characteristics. Clearly, Mercury sounds warm and emotional — perfect for intimate, low-key compositions, but it is also very punchy and aggressive on high velocities, a contrasting combination not usually found on other sampled-based virtual instruments, as audibly evidenced by its impressive 42 presets.

Justifiably, Jesús Ginard concludes: “This is not a regular sample library; this is something bigger. I’ve been waiting for this moment for a whole year. Now it’s time for you to play it, and I hope that you like it as much as we do.” Notably, Mercury is fully compatible with Native Instruments’ NKS® (NATIVE KONTROL STANDARD), an extended plug-in format allowing advanced integration with the company’s cutting-edge KONTROL keyboard controllers. If Freddie Mercury himself had played this killer combination, he would hopefully have approved. And rightly so. Indeed, it’s a kind of magic, as Freddie Mercury sang so amazingly — an appropriate and touching note to end on if ever there was one… and a fitting tribute to the man with the musical Midas touch to whom this tempting sample-based virtual instrument owes its inspiration and notable name.

Mercury can be bought directly from Wavesfactory as a Native Instruments KONTAKT PLAYER (version 5.2.2) powered sample-based virtual instrument for an introductory promo price of €99.00 EUR (incl. tax) — rising to an RRP of €149.00 EUR (incl. VAT) on December 5, 2016 — from here:
Wavesfactory | Mercury