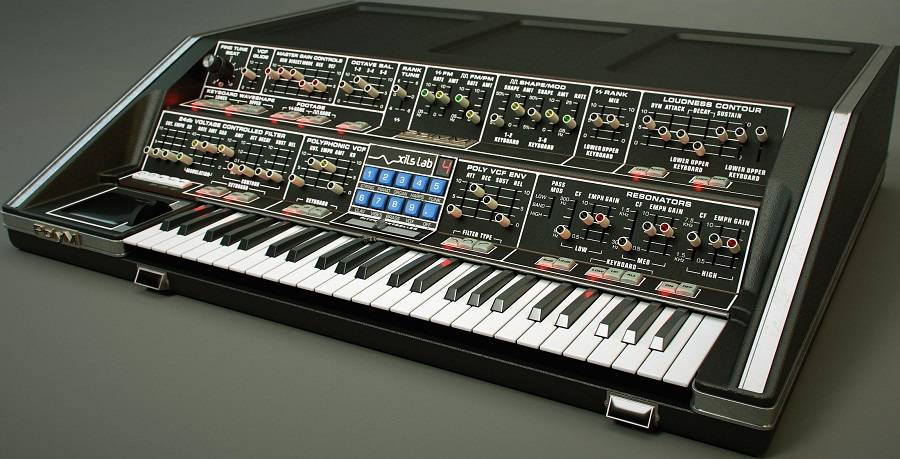 XILS-lab is proud to announce availability of PolyM — an authentic recreation of the pioneering Polymoog polysynth, dreamed up by American designer Dave Luce and produced by Moog Music between 1975-1980, but benefitting from finest French software skills to truly create a plug-in pleasure principal as arguably the best ‘virtual’ divide-down oscillator technology-toting soft synth available anywhere and teaching the old dog some new tricks in the process.

That’s today. Putting PolyM in its present-day context involves initially looking back. But back in the early-Seventies, setting out to create an analogue, functional voltage-controlled synthesizer that was polyphonic against a backdrop of monophonic mainstays proved problematic for many. Moog’s musical solution came quicker than most, making an appearance in 1975 in its extremely expensive ($5,295 USD), nine-preset original form as the Polymoog keyboard (model 203a). It included a front panel packed with an almost continuous row of slider pots (permitting presets to be fully modified into more individualised analogue sounds via various subtractive synthesis parameters, including a 24dB Moog ladder filter section — allowing modulation modulated from its own envelopes and low frequency oscillation — alongside a unique and flexible three-band resonant filter section with lowpass/bandpass/high-pass filter modes) before being joined in 1978 by a marginally more economically-viable ($3,995 USD), 14-preset stripped back version (with editing reduced to volume, tuning, high-pass filtering, and basic LFO — Low Frequency Oscillator — features), which was also (confusingly) called the Polymoog keyboard (model 280a), though the original fully-variable version was then rebadged, admittedly, as the Polymoog Synthesizer.

Saying that, unlimited polyphony united the two innovative instruments in question, albeit unlimited in the sense that all 71 notes of their weighted touch-sensitive keyboards (capable of being split into three sections, each with independent volume control) could sound simultaneously, but based on divide-down oscillator technology — similar to electronic organs and string synthesizers of the time — to generate all notes and pitches using a small number of fixed-frequency oscillators as an alternative to ‘traditional’ VCOs (Voltage-Controlled Oscillators). Obviously, the Polymoog cannot create each voice from individual oscillators and filters, nor store sounds programmed by the user — unlike the first generation of microprocessor-controlled designs that soon followed suit, such as Sequential Circuits’ classic Prophet-5, the world’s first fully-programmable polyphonic synthesizer — as a result. Regardless of those limitations and reliability issues inherent in its complicated, convoluted design downfall, some notable users still shaped some stunning-sounding records using the pioneering Polymoog.

Prime example… as an innovative individual almost alone in seeing the opportunity for a star of synth-based music, a futuristic-looking Gary Numan notably ‘drove’ over an endless Polymoog landscape in the pioneering promo video for his 1979 chart-topping ‘Cars’ single and arguably opened the floodgates for the wave of (mainly British) synth-pop acts that trailed in his wake. Wisely — and appropriately — once observed: Gary Numan’s classic breakthrough, The Pleasure Principal, is almost an album-length advert for the Polymoog. Those beautiful, stark, synth-strings frozen all over the songs is the Polymoog’s Vox Humana preset.

Fast-forward, then, to two years ago, and XILS-lab clearly considered those oft-overlooked Polymoog presets to be well worth revisiting, recreating an ‘unlimited’ polyphony polysynth that was recognisably revolutionary upon its initial release and making it fit for today’s creative computer-based music-makers with a state-of-the-art software makeover. Making that happen was easier said than done, however — hence that two-year development time. That equalled the same time taken to develop the original, overly-engineered historical hardware from which it drew its innovative inspiration, ironically — hardly surprising, given that the Polymoog uses a TOS (Top Octave Synthesizer) system with a TOG (Top Octave Generator) chip to create a bank of 12 square waves representing the top octave of the keyboard, each of which are then passed through a divider chip to create all the lower octaves, and can then be processed to create other wave shapes; making matters more complicated, the Polymoog has two sets of TOS chips, generating two wave shapes (pulse and sawtooth) per key — two oscillators per key, effectively. There are also two envelope generators, two VCAs (Voltage-Controlled Amplifiers), and two fixed filters for each key. Those circuits are combined into a custom chip called the Polycom, mounted on a small card, and there is one Polycom card per key. That all adds up to a whole lot of circuit boards in one cumbersome keyboard.… little wonder, then, that reliability became an issue!

No such issues with the perfected PolyM, but no pain, no gain getting there as XILS-lab CEO Xavier Oudin obviously learned — the hard(ware) way — when taking today’s much more reliable route to software-based synthesized splendour: “Recreating this legendary synthesizer as a virtual analogue synthesizer was a real challenge, but we decided to take up the gauntlet. This was made more difficult due to our real machine’s poor condition.”

Continuing against all odds, Xavier Oudin and XILS-lab literally created a plug-in pleasure principal when recreating the revolutionary Polymoog polysynth as a soft synth plug-in par excellence — even ending up with more bells and whistles when finally finished. “It took more than two years, analysing, measuring, testing, and scratching our heads,” he concurs, before adding: “But we are proud to now offer PolyM, one of the best — if not the best — ‘virtual’ divide-down-based virtual synthesizers out there!”

In there is what counts, though, and PolyM palpably doesn’t disappoint… deftly reproducing yesteryear’s divide-down technology with two TOD (Top Octave Divider) oscillators — one for the sawtooth wave and another for the square, slightly detuned for a phenomenal phasing effect (when running independently in FREE mode), yet these take the concept further forward by adding polyphonic pulse width modulation. Meanwhile, in LOCK mode, those two TOD oscillators are almost locked in phase, producing PM (Phase Modulation) instead of FM (Frequency Modulation) when the square wave oscillator is modulated in pitch. The two TODs can also be modulated — tempo-sync-able — in pitch by an LFO, while the square wave oscillator has it own pulse width modulation by a tempo-sync-able LFO. Alongside a distinctive envelope generator, this represents the musical heart and soul of PolyM, pushing that revolutionary polysynth sound kicking and screaming into the future!

More than 260 presets are available to help users get going and all parameters are MIDI-controllable, combining to position PolyM as an innovative instrument of its time while retaining the one-time pioneering Polymoog’s performance properties. Put it this way: while what Austrian neurologist and founder of psychoanalysis Sigmund Freud would have made of it is obviously open to speculation, surely Gary Numan should approve… as will anyone’s bank balance by paying (comparatively) so little for so much playing pleasure! Perhaps PolyM pushes beyond the pleasure principal?

PolyM is available to purchase as a USB eLicenser or iLok (1 and 2 dongle hardware or software) protected plug-in for an introductory promotional price of €99.00 EUR until August 31, 2017 — rising to an MSRP of €149.00 EUR thereafter — from XILS-lab here:
XILS Lab | Polym