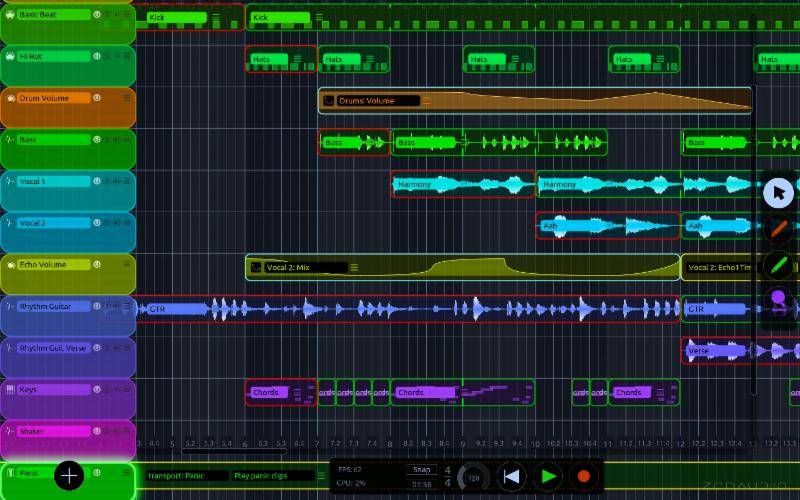 zenAud.io, a creative powerhouse and music software developer, has introduced a new concept for music creation and performance: arranged live looping. The company recently released ALK2, a unique cross between a looper and a sequencer.

For the first time, musicians can control what gets looped, and when — all within the familiar DAW timeline paradigm. Instead of an error-prone series of pedal presses, ALK2 empowers the musician to concentrate on their music, and let the software take care of the operational details.
During a gig, ALK2 follows the arrangement you rehearsed, pressing the necessary virtual pedals to arm channels, trigger effects, record and play loops at the right time — allowing the musician to focus on the performance, rather than on a pedal. Clips are recorded live and looped to create layers of sound, like a traditional looper, but, like in a sequencer, the loops can be drawn, moved, copied, cut and pasted in a musical arrangement.

ALK2 boasts many innovative features – all packed into an attractive and intuitive user interface.

Key Features:
Full featured VST/AU host with support for audio and MIDI looping using your favorite plugins, along with built-in quantization and beat repeat
If you make a mistake, the panic function allows you to recover gracefully by crossfading the current take with its reference version
Automation assignments are dynamic and can also be sequenced, allowing you to easily switch encoder mappings
Hover auditioning is an elegant and ergonomic way of handling monitoring during production: simply hover your mouse over the track you want to hear

With traditional loopers, it’s easy to get caught in an endless stacks of loops that go nowhere, and eventually collapse under their own sheer weight and tedium. Using ALK2, you can create dextrous transitions between different chord changes and musical sections, keeping your tracks light, fresh, and engaging throughout.