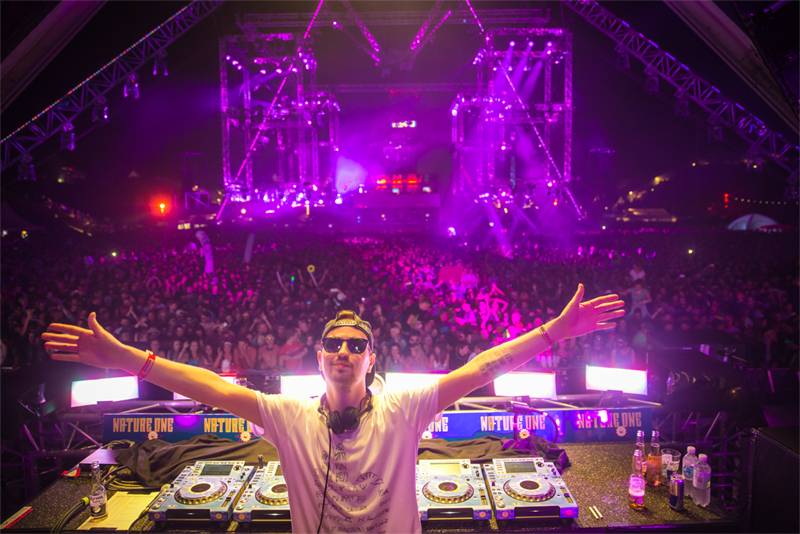 Within four days and three nights the 22nd Nature One became to an outstunning festival at Raketenbasis/Kastellaun again. For the third time in a row, Nature One has been sold out with 65.000 party people. As the night falls over the Pydna, the unique 26 metre high pyramid-construction which has been installed at the Open Air-floor, looked very amazing.

The rainy kick off at the Open Air Floor has been done by Cuebrick, and followed by Stefan Dabruck. At the same time the sunshine-live DJ-team (DJ Falk and Eric SSL) have been done the opening at the Classics Floor with tracks like Safri Duo’s „Played a life“, Casseopayas „Overdose“ and a great finish with „On the run“ by Tillmann Uhrmacher. (R.I.P, Tillmann).
Half past eleven Laidback Luke started with an progessive EDM at the main stage. An amazing EDM-, Trap- and Dubstepset has been followed by R3HAB, with some of his own hits singles like „Freak“ and other popular smash hits like „How deep is your love“ of Calvin Harris until Sander van Doorn pushed the crowd. Moguai has been the next one. A lot of other acts have been rocked in the Century Circus floor like Len Faki or Chris Liebing this night and on the House of House floor as well. The trance-classic set by Talla 2 XLC between two and four o’clock in the morning was really marvellous too.

On Saturday the weather has been much better, so it was fun to listen to Alok from Brasil on the Open Air Floor with it’s singer, A nice tech- and deephouse set has been played by Gestört aber GeiL from Erfurt, with their own hits like „Fliegen“, „Unter deiner Haut“ and much others. A tougher approach of music styles has been followed by The Ostblockschlampen, which have created an energetic EDM-mix. After that, the headliner of this event entered the stage – Robin Schulz, and the crowd has been gone wild till total ecstasy to his bunch of hits, like “Show me love”, “Suga Suga” and so on. When he finished his set, a breathtaking firework has crossed around the festival area – so it was time for Nature One Inc with their amazing anthem of this year – “Red Dancing flames“. The next DJ has been Paul van Dyk has been played a great trance set with songs like „Lights“ and „What We’re Livin For“ before Markus Schulz came around with a pumpin Trance and Progressive mixset. I may not forget that the most hard banging and craziest guys this evening have played on the classics floor – Charly Lownoise & Mental Theo. But that’s “normal”
I also enjoyed all the little bunkers of the old rocket base by the U.S. Airforce, which will be transformed into familiar clubs, like the Airport, Tunnel Club and especially the Vogue-Club. The Vogue is an indispensable part of the Nature One since 1997 and has always great DJs like Jay Frog) and others.

An unforgettable event, with such versatile styles of music in an incomparable atmospere, a high spirit by the audience and a well-done organisation – That’s NATURE ONE– that’s why we love it and why will come again!