More than 6000 party people came as a united community to Radio Nation on the 26th September to the Maimarkthalle Mannheim and made the vibes cook till six o’clock in the morning. It was the 3rd Radio Nation of Sunshine-Live and has been a great party with over 20 DJs and live-acts on three different stages. 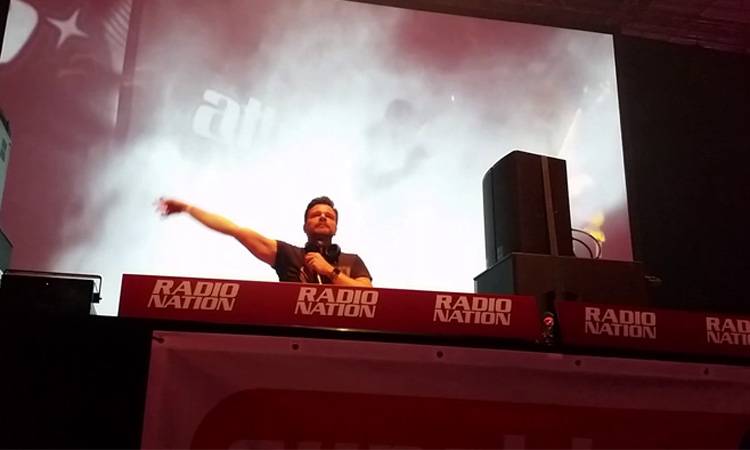 Studio1 has been opened by Wishes and Dreams, followed by DJ Falk from Tiger records. A floorfilling, pumping EDM set from Tommy, the Klubbingman, made the crowd go wild, followed by the Ostblockschlampen. After that, Tocadisco took over the decks with an very energetic set with an impressive lasershow, and probably everybody liked the records that he played. The next one who entered the stage, was the headliner of this evening – ATB. When he started playing there was no empty space on the floor anymore. The audience loved it to hear some of his classic tracks like „DJ ease my mind“ or „9 P.M.“ in a modern EDM style. Moguai was the next one and he also know how to inflame the mood to the boiling point, also with his new track „Hold on“. The finale set has been played by „Hardliner“ Felix Kröcher.

Studio 2 has been opened by the sunshine-live DJs Fabian Ferox and Jackbell, and an great set from by DJ Hildegard. TEEMID has been the next before TAI conquered the stage with one of the best sets this evening (in my opinion). The french House-DJ Kungs, which has played his first set in germany and David K. also knew how to entertain the crowd. The closing has been played by Ante Perry.

The groovy sounds of this evening have been played in the Studio Mixery, with an opening from Steffen Baumann, a liveset by Linus Quick and The Advent and two djsets from Harvey McKay and Hans Bouffmyhre.

All in all, it has been a great Radio Nation to all Sunshine-Live fans, with an top organisation by i-Motion, a friendly security personal and an outstunning crowd. For those one who coudn’t be there, Sunshine-Live has been broadfcastet ten hours live from the party. See ya for the next Radio Nation 2016, Mannheim.