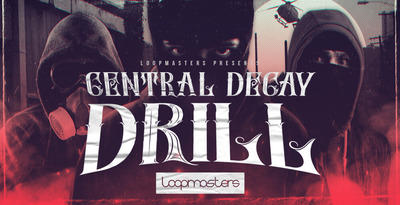 Loopmasters bring to you Central Drill – initially emerging from the Midwestern rap scene in the early 00s, Drill quickly became one of the most evolutionary sub-genres in rap and hip hop. Still evolving decades later, Central Decay Drill is a pack that delivers the hardest-hitting, cutting-edge beats and textures from a sound that continues to push boundaries across the world.

From urgent, rapid-fire percussion to paranoid pads, system-rattling bass and vocal distortions, the sound of Central Decay Drill is confrontational, otherworldly and passionate, delivered with urgency between 142BPM and 154BPM. In the spirit of Drill pioneers such as Chief Keef, Lil Durk and Fredo Santana, this powerful pack contains hits, sampler patches and impactful loops that also pay tribute to emerging Drill scenes in the UK, South America and beyond.

Whether you’re producing fresh bars from vital MCs or simply crafting the next high-impact club banger, Central Decay Drill guarantees serious fire for your workflow. With over 630MB of royalty-free sounds recorded in crisp, undeniable 44,1Khz, Central Decay Drill leaves no questions unanswered when it comes to the power of your productions.

And 86 Soft Sampler Patches for Exs24, Nnxt, Kontakt and Sfz