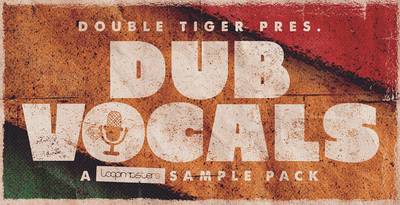 These Dub Vocals are brought to you by Jay Spaker aka “Double
Tiger” a vocalist, composer and producer in Brooklyn, NY. His
journey started at 14 playing in many reggae bands supporting
heavyweights like Burning Spear, Israel Vibrations, Culture and
more. These early experiences had a profound effect on the
young musician & a lifelong love of Jamaican music. Double
Tiger is a co – founder of Dub-Stuy Records and Guitar/vocalist
in John Brown’s Body (Easy Star Records.) as well as being
one half of the critically acclaimed Tour De Force, and being
on Guitar/ Vocal duties with John Browns Body.

Double Tiger Dub Vocals is the ultimate vocal showdown for your
rival sound system, with a treasure trove of layered vocals
parts to build your next Dub-inspired hit! It’s packed with
SEVEN full song construction kits, featuring Choruses, Verses,
Harmonies and Adlibs – expertly delivered and captured in 24
Bit quality. Each recording includes Dry and expertly Effected
versions to throw into your next soundclash, giving you the
freedom to experiment long into the night!

You can be sure that every element of these sounds has the
authenticity and vibes you need! This collection comes at
85-136BPM; ideal for summer jams anchored by a wobbling riddim
in Dub, Reggae, Dancehall, Roots, Soul, Jungle and many other
Genres.  Each song is key-labelled to get your melodies
right, from the start to the reload!