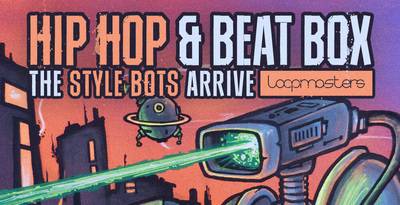 This unique collection introduces the Style Bots – robots from either the future or some other dimension where sound is the dominating force. Do they want to make us part of the system, or just erase us? Either way they’ve come fully equipped with all sorts of damaging melodic bass loops each with effected versions – some with scratch versions, the huge array of beat box hits included will prove invaluable to any hip hop producer, you’ll also find a ton robotic sounds, spooky vocals, fat beats and abstract synths.

Keep your ears and eyes to the skies for the next wave of invaders. If you need more fresh beats and battle breaks like these, you can find parts one, two and three of this hip hop series here: Hip Hop Arrival 01 – Attack Of The Illmatix, Hip Hop Arrival – The Star Mobster Heist and Hip Hop Arrival 03 – The Unfixed Colossus.